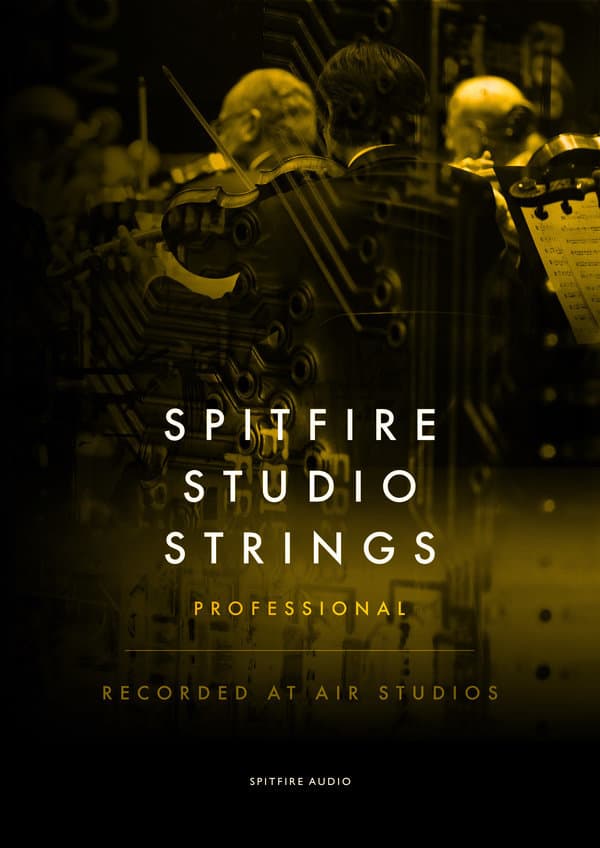 Today, we are looking at our review at Spitfire Studio Strings Professional by Spitfire Audio. Spitfire Audio is known for its film composer-ready orchestral instruments libraries.

The instrument is sampled in minor thirds, and shot in major thirds, with a separate collection of articulations and short notes.

Spitfire Audio claims that the instrument itself is very lightweight, without sacrificing quality or character. “Lightweight” is usually not a word used to describe orchestral string libraries. Many today are known for their epicness and huge amounts of content. However, when looking at the sheer amount of articulations available in Spitfire Studio Strings Professional, it is much more than most single-library libraries out there.

Spitfire Audio has made several improvements to the GUI over its other string instruments; things like legato controls (for both bow direction and speed), slides (besides the usual sustain-slide), and a variety of expressions controls.

You use the download and install tool provided by Spitfire and register the downloaded libraries in Native Instruments Native Access using the provided serial. Kontakt or Kontakt Player 5.6.8 or higher is required. During install you need over 422 GB and the library itself does require a bit more than 211 GB.

Speaking of the best time to buy, look out for wish list sale or go for bundled products which the company calls collection. I would recommend going for the professional version, you could start with the core version if it makes business sense to go that route.

The Spitfire Studio Series (Brass, Strings, and Wood) has been recorded in Studio One at Air which provides a sound that is drier and can be shaped easier plus it is a more focused and detailed sound. You get a so-called dry library as the room has very little reverberance.

This library recorded in Studio One is an excellent choice for a composer who is in needs to have further control over the resulting aspects of the character and tone. Strings drive home the emotion and are key to composition. With the dry space, you have the control to drive the emotion home.

In this strings library, you have the choice between a wide range of instruments. The single instruments come with an extended range of articulation (compared to the core version) and what spitfire calls their extended techniques.

Besides having access to 232 articulations you can leverage seven different microphones and two mixes. You can select any of the five microphone recordings in addition to the three available in the core version on top you get two carefully mixed versions.

If you do have access to Symphonic Strings Libraries you should look into combining a Symphonic version with the studio version. A Symphonic Strings library would give you that ambient, lush, loose, symphonic, epic, film and cinematic sound.

The studio library is intimate, private, and dry. You may think TV, producing music, and ads are a good fit for Studio Libraries and a Symphonic library for epicness. The studio version is more defined and combines that with the more epic libraries. The result could be an epic score with some detailed voicing, just add some reverb, compression, and mastering effect tools.

The UI is a classical Spitfire Audio interface and is in line with their other products released for some years. Now with Kontakt 6 and larger screen real estate, I would like to see Spitfire upgrade their look and feel, and as with their non-Kontakt libraries provide a UI that is just larger and offers more information which comes with easier to read for many as well. These days their UI used on common high res screens is extremely small. The GUI cannot be scaled. Any composer who owns another Spitfire library will find their way around rather quickly.

With the included Ostinatum feature you can create rhythmic patterns. Results are best with short articulations. It is all very tiny (see above) and you can think about it as a mixture between a limited sequencer and arpeggiator. The design asks for a tutorial video on how to use it.

Spitfire Studio Strings Professional is an ideal virtual string instrument for soundtrack composers and music producers looking for a complete, authoritative collection of strings in one package.

The included musical articulations are wide-ranging, beautifully recorded in Lyndhurst Hall at Air Studios London, and performed by an elite team of the top sessions.

In conclusion, Spitfire Studio Strings Professional is a great virtual string instrument for soundtrack composers and music producers looking for a complete, authoritative collection of strings in one package. The included musical articulations are wide-ranging, beautifully recorded in Lyndhurst Hall at Air Studios London, and performed by an elite team of the top

Rating:  Five out Of Five Stars

You can never have enough String Libraries. The acoustic intensity sets Studio Strings apart from other more symphonic Spitfire libraries. If you are composing professional, you need the whole Studio lineup.

The entire Studio Series and Spitfire Studio Strings Professional is no exception is an excellent addition for any composer who works on a modern film score and contemporary pop music. This dry library allows you to add a reverb to the sound and put the string ensemble in every place it needs to be.

The Spitfire Studio range comes with exceptional tonal versatility, a unique acoustic color encompassing the sample, and is the main reason you need another String (or Brass or Woods) library. Remember that you can combine the Symphonic String Libraries recorded in Air Lyndhurst with this more comprehensive and right in your face library.