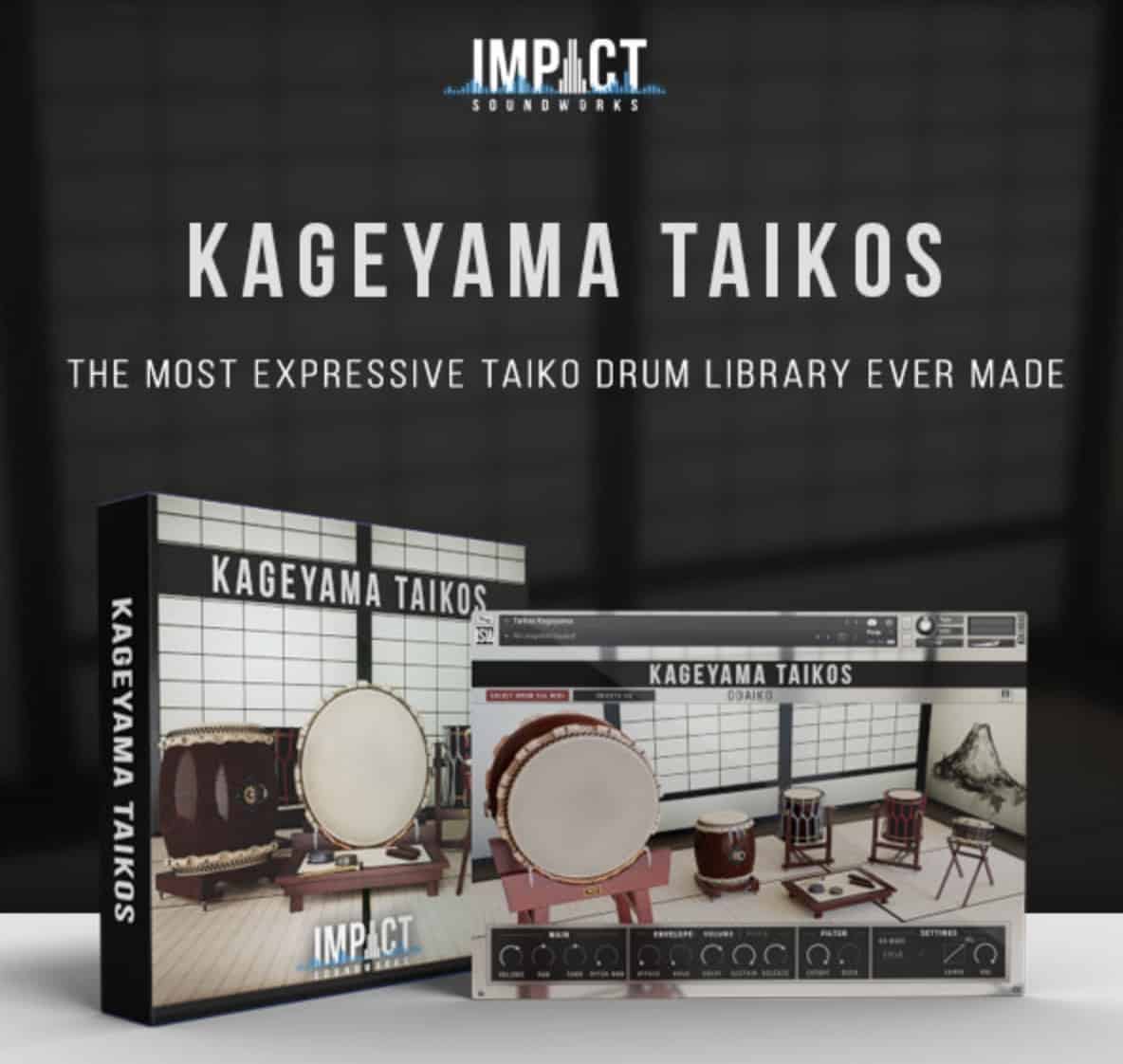 The most expressive Taiko drum library ever made. This is the perfect, versatile sound for any project and genre!

Taiko drums have been heard in recent years far beyond the borders of Japan. The deep yet crisp sound they produce can be found featured on recorded and live music around the world, making them an international phenomenon that’s not going away anytime soon!

Impact Soundworks is known for its high-quality, detailed sample libraries, and its Studio Drum Sessions library is no exception. These drums have been recorded in an intimate studio setting, resulting in a sound that is both versatile and realistic.

One Global Nation Under a Groove – Kageyama Taikos

Every drum in the set has been captured in great depth, providing users with a wealth of options for articulations, dynamics, and variations. The result is a library that can be used in any style of music, from rock to jazz to classical. With its wide range of sounds and comprehensive collection of features, the Impact Soundworks Studio Drum Sessions library is sure to be a valuable addition to any musician’s toolkit.

Taiko drums have been an essential part of traditional Japanese music for thousands of years. Their deep, resonant, yet crisp sound is unmistakable, whether played solo or as part of a massive ensemble. In the last century, their prominence has risen far beyond the borders of Japan, appearing in major film & television scores, video game soundtracks, and international events.

Impact Soundworks wanted to devote a sample library entirely to taiko, with several accompanying percussive instruments, played by a master to open up as many options for inspiration as possible. Taiko drums are traditionally made from wood or animal skin, which gives them their unique sound.

The size and shape of the drum also affect the sound, with larger drums producing a deeper, more resonant tone and smaller drums generating a higher-pitched sound. In addition to the standard taiko drum, there are also tenor taiko (played with two sticks) and bass taiko (played with one stick).

No matter what type of taiko drum you use, they all produce an unforgettable sound that will bring your music to life.

You will be able to hear Impact Soundworks’ new series of taiko drums in a variety of settings, from solo performances and epic orchestral works. These detailed recordings have been captured with an intimate studio sound that shines equally well for both traditional tunes or those you’ve dreamed up yourself!

The power and presence of Japanese drums, recorded with a focus on authenticity. Kageyama Taikos shines in traditional music but can be equally at home wherever your imagination takes it: pop or rock; jazz fusion—it’s a versatile performance that features master percussionist Isaku Kageyama playing eight distinct solo instruments.

Kageyama Taikos features the dynamic performance of master percussionist Isaku Kageyama on eight distinct drums, each sampled with a variety of playing techniques.

Blend Kageyama Taikos with Other Drums

As a drummer, I’m always on the lookout for new ways to improve my sound. And one of the best ways to do that is by using Kageyama Taikos. These Japanese drumsticks are some of the best in the business, and they’re perfect for helping you get that big, powerful sound.

But if you really want to take your drumming to the next level, I would also highly recommend mixing Kageyama Taikos with Toontrack’s EZdrummer 3. This software is an absolute powerhouse, and it will help you create drum tracks that are second to none. Trust me, if you’re serious about taking your drumming up a notch, then you need to check out Kageyama Taikos and Toontrack’s EZdrummer 3. You won’t be disappointed!

Taiko drums are some of the most iconic and recognizable instruments in the world. They have been used in traditional Japanese music for centuries, and their deep, resonant sound is instantly recognizable. In recent years, taiko drums have become increasingly popular outside of Japan, appearing in film & television scores, video game soundtracks, and international events.

Impact Soundworks created a sample library dedicated entirely to taiko drums, played by a master drummer to provide a wide range of possibilities for inspiration. The result is a powerful and versatile collection of sounds that will add a unique dimension to any musical project.

Japanese drums, or taiko, have a long and distinguished history. Used in religious ceremonies and rituals for centuries, they are now beloved by audiences all over the world. Thanks to their power and presence, taiko are perfect for a wide range of music genres, from traditional Japanese music to epic orchestral works. On Kageyama Taikos, master percussionist Isaku Kageyama showcases the versatility of taiko with eight different solo instruments.

From the rumbling o-daiko to the sharp shime-daiko, each drum has its own unique sound and personality. Whether you’re looking for energetic rhythms or tranquil melodies, Kageyama Taikos has something for everyone. So let your imagination run wild and discover the endless possibilities of Japanese drums.

This is a sound library that will change the way you hear percussion. It features master percussionist Isaku Kageyama playing eight distinct taiko drums, each sampled with a variety of playing techniques. These drums have a deep, rich sound that can be found in recordings and live music around the world.

Kageyama Taikos is available now for the introductory price of $79 (MSRP: $99) through the Impact Soundworks web store. It runs in the FULL version of Kontakt 6 to take full advantage of its latest effects and features.

Add movement, dimension and rhythm to any track | DS Audio