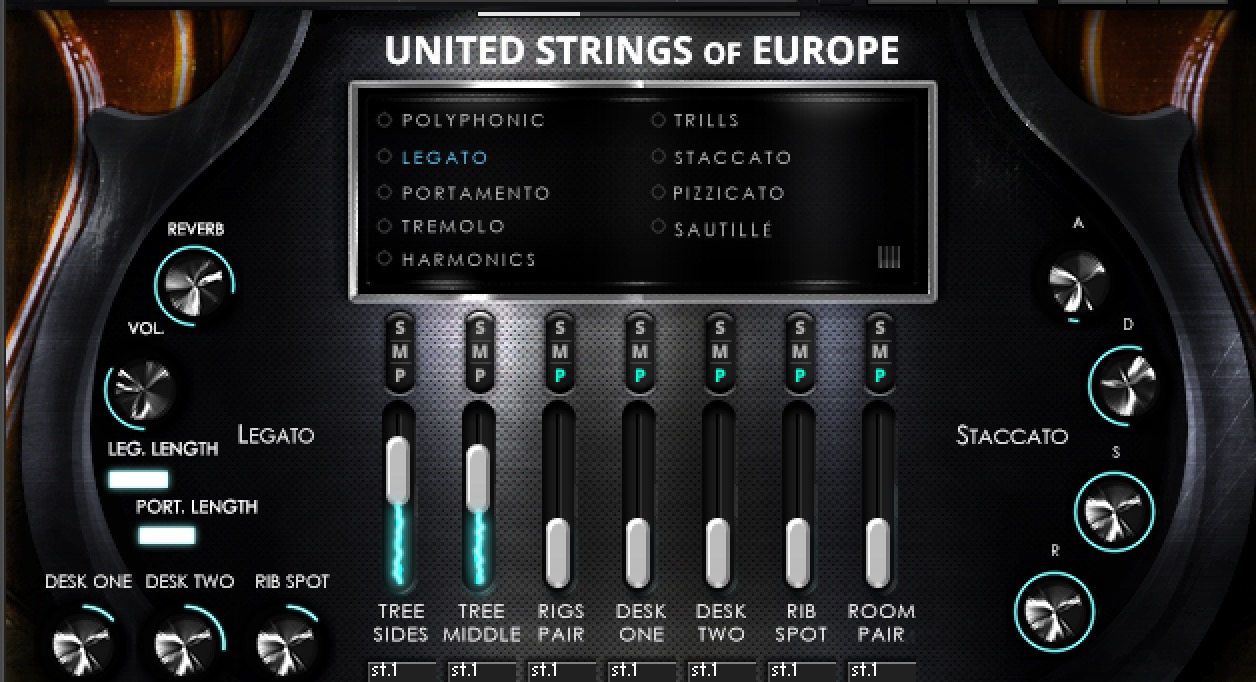 Today we’ll be checking out a comprehensive string library from Auddict – United Strings of Europe. String libraries are something close to many composers’ hearts, and as an avid collector of such libraries this one is no exception. There are however, a lot of expectations for a string library to live up to, so we’ll discuss just how this one holds up.

Auddict is a relatively newer sample provider, focusing on orchestral and cinematic libraries such as the Master Brass collection and Drums of the Deep. They produce ambitious libraries – albeit with ambitious prices also – and many of their libraries feature an array of microphone positions recorded to provide flexibility of mixing. Auddict did send a review copy with no strings attached.

United Strings of Europe contains 1st Violins, 2nd Violins, Violas, Celli and Basses in the standard ensemble size, recorded in a concert hall with slightly different positioning depending on what microphone you’re using. We get legato and portamento, staccato and sautille (or what some refer to as “tapped spiccato” or “spiccatissimo”), tremolo and major/minor trills, pizzicato, and harmonics for all sections (except basses, which don’t have portamento). We also get 7 microphone positions for all sections (6 for basses) which includes a few mono mics for precise panning.

Installation merely requires the downloaded .zip files to be extracted to your folder of choice, and no registration is necessary as the library requires the full version of Kontakt to run. The download however, is provided in-browser – which can be an annoyance as each .zip file must be downloaded manually, and the library ships as uncompressed WAV samples rather than Native Lossless, so you’ll be staring at a whopping 50G+ download broken into separate parts.

Once you’ve gotten over the download hump, you’ll have to wait a while for each patch to load initially – as stated before the samples are uncompressed. I can’t criticize Auddict too harshly for this move, but I’ve been seeing a lot of these uncompressed libraries pop up of late and I can’t help but think it’s a decision made just to make libraries appear “heftier”. While I think this kind of approach is rather backwards and overburdening to customers’ hard drives, I can’t speak for Auddict’s reasons myself so I’ll just get straight to how this library sounds.

The sound is, to put it simply, great. The strings sound articulate and controlled, and have a subtle lushness to them that’s comparable to “Chamber Strings” by Spitfire Audio, only not as wet or imperfect sounding. There’s a satisfying balance between starkness and molto vibrato in the longs that make these strings fit into a wider variety of applications – whether it be emotional and cinematic or stoic and classical.

The microphone positions each provide their unique perspective of the instruments’ interaction with its environment – the decca tree is fat and wide, the rig microphones are reverberant and detailed, and the room mics are spacious and soft, and the spot mics (which come in condenser and ribbon flavors) provide a dry closeness that can be used to create a more intimate chamber sound.

Every section but the basses have two condenser spot mics, so if you want a wide yet focused cinematic sound, you can pan these two hard left and hard right and it sounds great. This control allows you to position the strings wherever you want for the most part.

Each articulation is fairly symmetrical – you can key switch between legato and tremolo, or trills and shorts while maintaining seamless air and position, so the library gets top marks for self-unity. The harmonics are also quite nice and have a silky air about them. My personal favorites though are the two short articulations – staccato and sautille (pronounced soh-tee-yey). This is what I believe to be the library’s strong point. You might initially think “what’s the big deal?” when playing, but further use and application reveals just how use-able these two simple articulations are in this library.

I’ve heard many libraries that sport more short notes than needed, but few that get just these two articulations perfect sounding – granted, USE’s short notes aren’t as masculine or boldly cinematic as some libraries, but they have a rarity about them in the captured performances. The sound is also similar somewhat to Spitfire’s Chamber Strings, but these are slightly better in my opinion. The staccatos have a leisurely attack and sweep to them that make them perfect for mid-paced arpeggios and stately passages, and they have a sense of control over them that just makes the performance sound more commanding. They’re not too long and not too short – just right.

The sautille, on the other hand, is a short tasteful bounce that sounds wonderful when playing fast passages, repeated notes and proficient, focused melodies – these shorter-than-short notes sound adventurous and inspire melody from the composer when just simply playing, and that’s a great thing to have. It’s not often I’ll find myself “inspired” by short notes, and this is one case where I definitely was.

Of course, this is a great library – but it’s a great library with some quirks. The aforementioned releases may be a problem for some, so I hope Auddict can either re-edit the releases to be longer and boost their volume or record new releases to add to an update. I tried boosting the volume of the releases manually inside the editor, but many of the samples were cut too short to sound like a natural reverberant release – like I said, this may or may not pose a problem for some composers, depending on how picky they are. I just use the supplied reverb to cover them up personally.

Another thing some potential buyers may have a concern about is the price – namely, the amount of content provided for the said price. The library has a 500-pound price tag – converted to USD that’s about $700 – which is no laughing matter, considering United Strings of Europe doesn’t provide extras like bartok snaps, col legno, sul ponte, different legato types, sordino or effects. To compare, Spitfire Audio’s Chamber Strings shares the same price tag as United Strings of Europe, and it sports all of these articulations and more.

What you’ll have to decide is, is it worth the price of entry. If you think it is, and you can get your money’s worth through constant use, by all means, go ahead – but do wait for a Christmas or Black Friday sale, because it could save you a lot of cash in the long run.

The interface itself is straightforward. Controls for interval volume, legato and portamento length (which I think is best set all the way to the right for genuine, fluid transitions), mic volumes with solo, mute and purge buttons, and panning controls for the spot mics.

There’s also an included reverb knob that applies more of the natural reverb of the hall the strings were recorded in to increase the lushness and blend in the releases. That last one is an important one, as the releases for the long notes are very short and very, very quiet – you may wonder if there are any releases for the long notes in fact, so I’d keep the reverb on.

All that said, United Strings of Europe is a practical and lush sounding library with great self-unity and functionality, and what I believe to be two of the best short note articulations found in any string library.

United Strings of Europe is just short of being truly great. It deserves the full 4 stars, but that extra star is reserved for those extra articulations and releases you don’t get for the price. If, somewhere down the road, Auddict decides to release a major update for these releases, including an attack and release control for the polyphonic longs, and perhaps some col legno, bartok pizz and effects, rest assured they’ll get their full 5 stars.