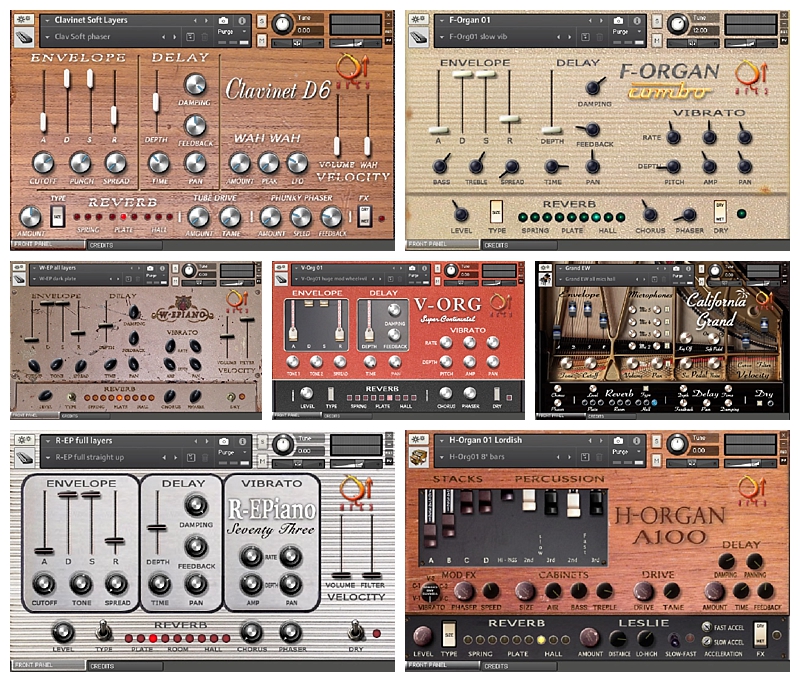 With the multitude of piano and keyboard libraries on offer, it’s difficult to make a choice let alone feel like you made the right choice when it comes to buying and playing such libraries – pianos and keys can be a very personal thing for composers (most composers play real pianos and keyboards often after all) so without steering too far one way or another, let’s have a neutral look at a keyboard bundle by Q Up Arts – California Keys.

Q Up Arts haven’t made a lot of “sample libraries” as we’d call them nowadays, but they’ve been active and recording loops for quite a long time, back when providers like Spectrasonics and East-West were the main contributors to the slowly growing sample world. California Keys is their flagship keyboard collection, and it ships with a Fazioli Grand, a Wurli and Rhodes, a Clavinet and three organs for covering your pop, soul, rock and ballad music needs. Q Up Arts did send a review copy with no strings attached.

The library is pretty hefty – around 30 gigs as a download, which depending on your browser or location may take a while to finish. Then it’s just a matter of unzipping the first archive to your folder of choice, and registering the library in the Native Access program which can be downloaded at Native Instruments site.

Let’s start off by covering the sound in general that this library sports. While many keyboard libraries like to offer an upfront, polished sound ready for dropping into your tracks, California Keys has a dryness or rawness to its recordings that may sound a little “unkempt” for some. Personally, I find the less-than-sparkling sound to be refreshing when compared to the majority of keyboard libraries I’ve played. It’s a great starting point for mixing or tweaking, rather than having the instrument pre-cooked and polished from the start. With that in mind, let’s go through the instruments.

The Clavinet D6 has the bite, as it should, and although there’s no control given for release samples to get that chunky key-off sound, the instrument has plenty of dynamics and is even provided with a “soft dynamics” patch, which I think is neat. In fact, all of the instruments are provided with this patch, so hearing the quieter dynamics under the spotlight is a nice thing to have handy, especially for more light-handed players like myself.

The three organs provide three distinct sounds – the Farfisa Organ, which has a nutty vintage sound for that old school synth-pop vibe – the Super Continental organ, which offers a bright and bold tone for rhythm & blues or soul – and the A100, which comes with all the stops (the organ stops) and can be used for a plethora of groovy sounding phrases with clear definition.

Then there’s the Vintage W-Piano (Wurli) and the Vintage E-Piano (Rhodes) – the Wurli sounds appropriately woody and charming, while the Rhodes sports that classic dreamy tone, and is one of my more favorite instruments in this package.

The Fazioli 10 foot grand is the main bulk of the sample content in California Keys, coming with a bunch of dynamic layers, sustain resonance samples, key noise and pedal noise samples, and 5 microphone positions to choose from. This piano sounds quite warm and resonant, and while it can handle hard and fast playing, it shines with soft playing and cinematic applications.

As a whole, the instruments sound adequately great, so there are no complaints there (keeping in mind some may like or dislike certain sounds depending on their preference for how keys should sound), so the other thing to mention is the GUI.

Each instrument has slight variations, for example, the instrument background style and the kinds of controls available (like mic faders for the grand, organ stops for the organ and so on), but for the most part, the patches come with the usual onboard effects and tweaks.

Velocity response, tremolo, wah, distortion, reverb, delay and ADSR faders are all present, allowing the user to take the core instruments and create interesting sounds for different applications – so you can dial in tremolo for the Rhodes, verb for the piano, cab distortion for the organs and so on. Everything you’d need for composing mainstream music with keyboards is there, and it works well. The piano was also recorded with 7.1 surround mixing in mind, so there’s that too.

Overall, what California Keys offers is a well-prepared collection of deep-sampled keyboards rather than the composer having to pick and choose from a variety of single-instrument libraries that eventually cost so much more on their own.

A varied keyboard and piano package isn’t all too common, with one of the few alternatives being something like Spectrasonics’ Keyscape for example (which is phenomenal if you can afford it of course) so California Keys is a well-rounded alternative that covers a lot of ground for mainstream composing.

As I said earlier, keyboards and pianos can be a really personal (sometimes annoyingly personal) thing for composers and sample collectors like myself, so I can’t logically swerve you one way or the other about California Keys. Perhaps watching the video I’ve provided will give you more of an insight as to the sounds themselves. In the end, California Keys does what it needs to and does it well – and I can definitely see loop producers and hip-hop artists getting some well-deserved use out of this colorful collection.