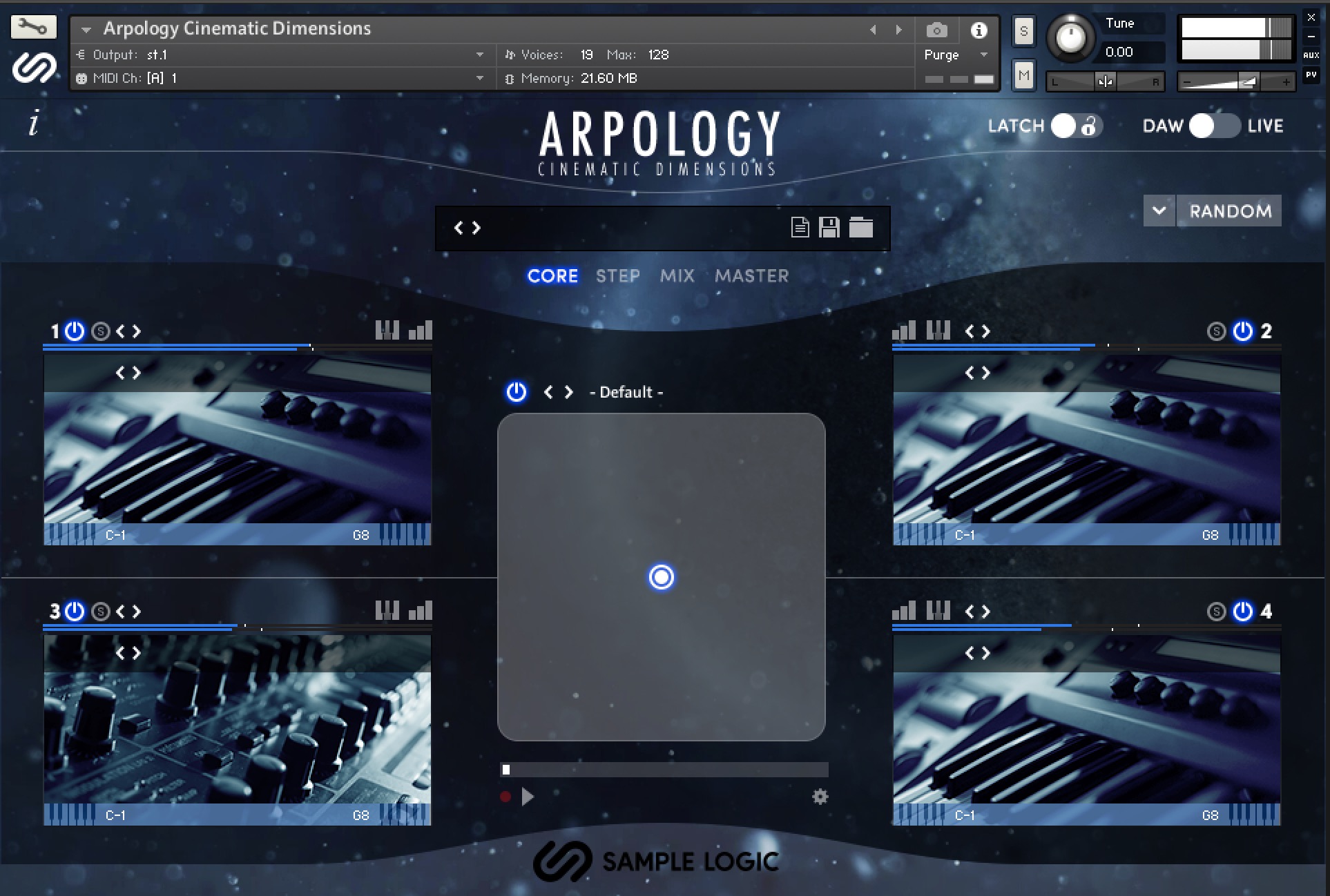 Today we are reviewing ARPOLOGY – Cinematic Dimensions by Sample Logic which has It has been in development for a year.

This collection features a wide array of Arpeggiated and rhythmic patterns as well as ambient soundscapes that will add an earth-shattering punch to your next project! These sounds have been tested heavily on many films, trailers, television shows, and games.

The way it works is with an Arpeggiator and a Sequencer so you can automate your patterns with midi cc control or manually adjust them with the touch interface of your iPad with some additional effort.

In 2012 Sample Logic developed an arpeggiator that bounced up the industry. This ground-breaking piece of scripting was named the “Step Animator,” and it became the driving force behind a fantastic multi-genre sample library, the original ARPOLOGY.

Compared to the legacy product the new library ARPOLOGY – Cinematic Dimensions increases the power of ARPOLOGY considerably with the extension of an all innovative 4-core performance engine. You can now individually animate four instruments with the new engine to create one cohesive sound. Sample Logic did send a review copy with no strings attached.

After purchase, you receive codes to download the library through the Continuata Tool. Downloading and installation are done comfortably. The tool used is an excellent method to distribute libraries. The library requires the full retail version of Kontakt, version 5.8 or higher (Will not work in the free Kontakt Player!). You need 24 GB of free disk space for CINEMATIC DIMENSIONS sample content.

If for some reason ARPOLOGY CINEMATIC DIMENSIONS will not load correctly or is missing presets, please look inside the CINEMATIC DIMENSIONS folder for a folder called “Presets – Arpology 2” and move it to the Kontakt 5 folder located n users/documents/Native Instruments/Kontakt 5. I did need to do that as I did run into this issue. If you run into the issue, you will see an empty preset folder

and when you select one of the “invisible” ones you see this:

This issue above can be easily fixed following the instructions above.

After launching the legacy ARPOLOGY library in 2012 Sample Logic is a staggering composer again and in a very positive way. ARPOLOGY – Cinematic Dimensions is more efficient and includes 23+GB of sampled instruments (combining original ARPOLOGY and newly recorded content).

The new library ARPOLOGY – Cinematic Dimensions takes sequencing and arpeggiated sounds to an entirely different level. The library has been specially designed for musical movement.

The included presets makes it easy for you as a composer to start composing to picture. As it has been said about other Sample Logic libraries the job of a composer gets almost to easy as you can produce with this support of the features and variation through randomization produce and compose scores and tracks with ease.

Sample Logic has designed the UI and included features by considering end-users needs to produce in effective way scores, background music, and other musical elements with ease. The tools allow you to create a score for example in the competitive trailer business quickly and when you are under tight deadlines.

ARPOLOGY – Cinematic Dimensions quadruples the power of the original ARPOLOGY with the addition of an all-new 4-core performance engine, individually animating four instruments to create one cohesive sound.

The XY controller movements may be assigned to a hardware controller or choreographed with a pre-defined automaton pattern. Custom XY movements can also be recorded and played back each time a note is triggered directly inside the interface, allowing for further customization.

It’s time to put the pieces together. In this stage, you’ll be programming animation for all four cores. Add movement in two ways: either through the Step Animator or the Dynamic FX Animator, which allows for simple FX automation.

Each core has its own arp sequence thanks to the Step Animator. This isn’t your typical run-of-the-mill arpeggiator since it offers many more configurable features and performance parameters than a basic arpeggiator. With up to 128 steps, you can set the length and characteristics of each step separately.

The STEP section features more than 300 different animation settings that may be randomized to provide fresh designs on the fly. Also, use the dynamic browser to get just the step pattern of any of the main presets using the browser filter section, allowing you to create an infinite number of sound and animations combinations.

The lower half of the expanded STEP section has six effects slots with over 25 distinct effects to choose from, and each of these may be animated. The Step Animator and Dynamic FX Animators are on separate internal clocks, allowing for greater syncopation and polyrhythm creation between each core.

The MIX window, like the CORE window, is designed to mix each core. Modify attack, release, EQ, energizer, and more.

In the MIX window, you’ll find all the controls to fine-tune each of the four cores. Each core has its own stereo mix, panning, level, and FX send. You can also apply global effects to the entire mix. The MIX window is where the final sound design takes place.

This is where the final stereo mix occurs. The master section includes eight dynamic effect inserts, each of which may be used to build a unique master effects chain by applying the settings to all four cores.

By following these steps carefully, you may polish your entire guitar as a whole. Use the many and varied controls to finish presets production-ready, from compression and saturation to delay and reverb.

The library contains more than 1200 adaptable sequencers and arpeggiators for all sorts of cinematic projects.

An included browser lets you explore every sound available in the library. ARPOLOGY from Sample Logic is a landmark virtual instrument that will forever change the way sound designers, composers, and performers think about arpeggiation.

The included presets are distinct in style and scope. The library emphasizes an efficacious built-in randomization features which can automatically inspire you as a composer in an infinite amount of ways. The randomization features remix fragments of presets to produce a uniquely original cinematic sequence – all at the click of a button. You can define which parts of the instrument or library the random function effects.

When you work with the UI, you can find through the randomization tool or presets a good starting place. You can keep the instruments and effects you like and shape the cores playing that need adjustment and voila you do have what you need in no time especially when you used the interface a few times.

ARPOLOGY – Cinematic Dimensions is an incredible sample library created by Sample Logic. It’s a massive collection of sounds that will allow you to create cinematic masterpieces. The sounds are arranged in a way that makes it easy to find what you’re looking for, and they’re all high quality.

ARPOLOGY is the perfect tool for film composers, sound designers, and producers who want to create high-quality cinematic music. The sounds are so realistic that you’ll feel like you’re right in the middle of the action.

ARPOLOGY is an innovative and powerful instrument that allows for the creation of cinematic sequences with ease. The library is filled with presets that are designed to produce adjustable sequencing and arpeggiated scores for all sorts of productions. The interface is easy to use and makes it simple to adjust the sounds and effects of each core. The ARPOLOGY is perfect for all sorts of cinematic productions.

ARPOLOGY – Cinematic Dimensions  is an extensive collection of moving sounds and instruments all easily accessible through more than 1200 presets. Sample Logic products are an exceptional investment for anyone who needs to produce on a tight deadline or is in need of excellent moving sounds that work in many genres, trailer, anything to picture and for games.