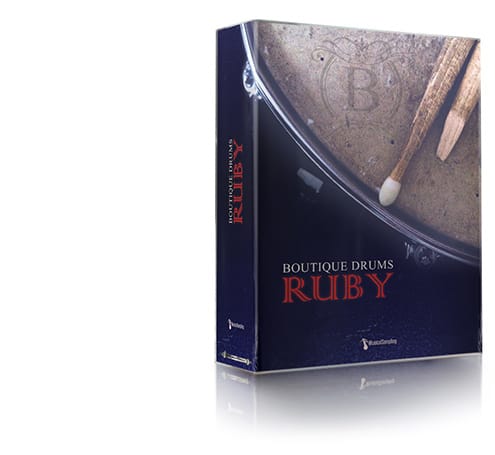 Ruby under review today is the first release of Musical Sampling’s Boutique Drums series. Musical Sampling aims with this library to deliver a simple to use a library that has the right tone and sound out of the box.

This drum library was created with drummer Brian Scoggin (Casting Crowns). The Ruby Boutique Drums were recorded at Hey Hey Hey Studios in Griffin, Georgia. This recording studio is known for its very good acoustics and technology. The studio is a remarkable location that offers a well-balanced balance of space and character.

After purchase you receive a code to download the library with the connect tool. Ruby is compatible with Kontakt 5.8.1 or higher (requires full retail version of Kontakt).

Ruby was developed as a library that any composer or producer can quickly use to add drums to their track. There are eight presets included to fit into the tone and vibe. In many cases the presets allow you to add the drums seamlessly into your track. Ruby is extremely adaptable. You can use it across different genres. It fits excellent into pop, rock or cinematic track. Performed at a softer velocity (especially Closer), you can really get an intimate sound or go aggressive with the other predefined patches. Every one of the eight mixes was produced using hardware and software processing and shaping tools. The mixes benefit mainly from the Hey Hey Hey Studios where the recording take place, the studio is known for its very good acoustics.

Comparing Ruby with my other drum libraries like DrumCore (DrumCore 4 Ultra by Sonoma Wire Works Review) and Superior Drummer 3 I do see a price difference and that with Ruby you are getting results quickly without the need to dive into midi packs and different drum kits.

Musical Sampling is known for offering very playable and easy to use libraries, Ruby is no difference to the existing product line. The UI is as honest as it can be for an easy to use Interface. The workflow of the Musical Sampling libraries simply truly works for many composers and their workflow. I was able to produce beats within minutes after loading the Kontakt file.

You can extremely easy switch between the included baking mixes as shown below.

If you do own Slate Digital’s Trigger 2 there are so-called Trigger files (.tci) included being used with the plugin from Slate. Supportted are all eight presets Closer, Workhorse, Roomy, Jock, Reaper, Fig 8, Driven, Bottomed with multiple velocity layers and variations of the one-shot samples for Kick, Snare, and Toms.

You do want to apply compression (right choice are Novatron, Arturia ones, or Cobalt) without hearing any pumping to shape the drum sound further. On the flip side go for some aggressive pumping effect as well as subtle ducking and keying. Using compressors (and EQ) are for experts only, you can use the Ruby library without it or ask your trusted mix engineer.

Ruby is just crazy good and produces great sounding drum track right out of the box. The sound of the recorded drums is based on vintage, rare and exceptionally boutique drums kits and snares. Ruby is wonderful when you need fast and excellent sounding result while composing, especially if you working on trailer projects that are under time pressure you can just use one of the numerous global mix-presets.