Review of Elysion a Scoring Tool by Sonuscore & Best Service 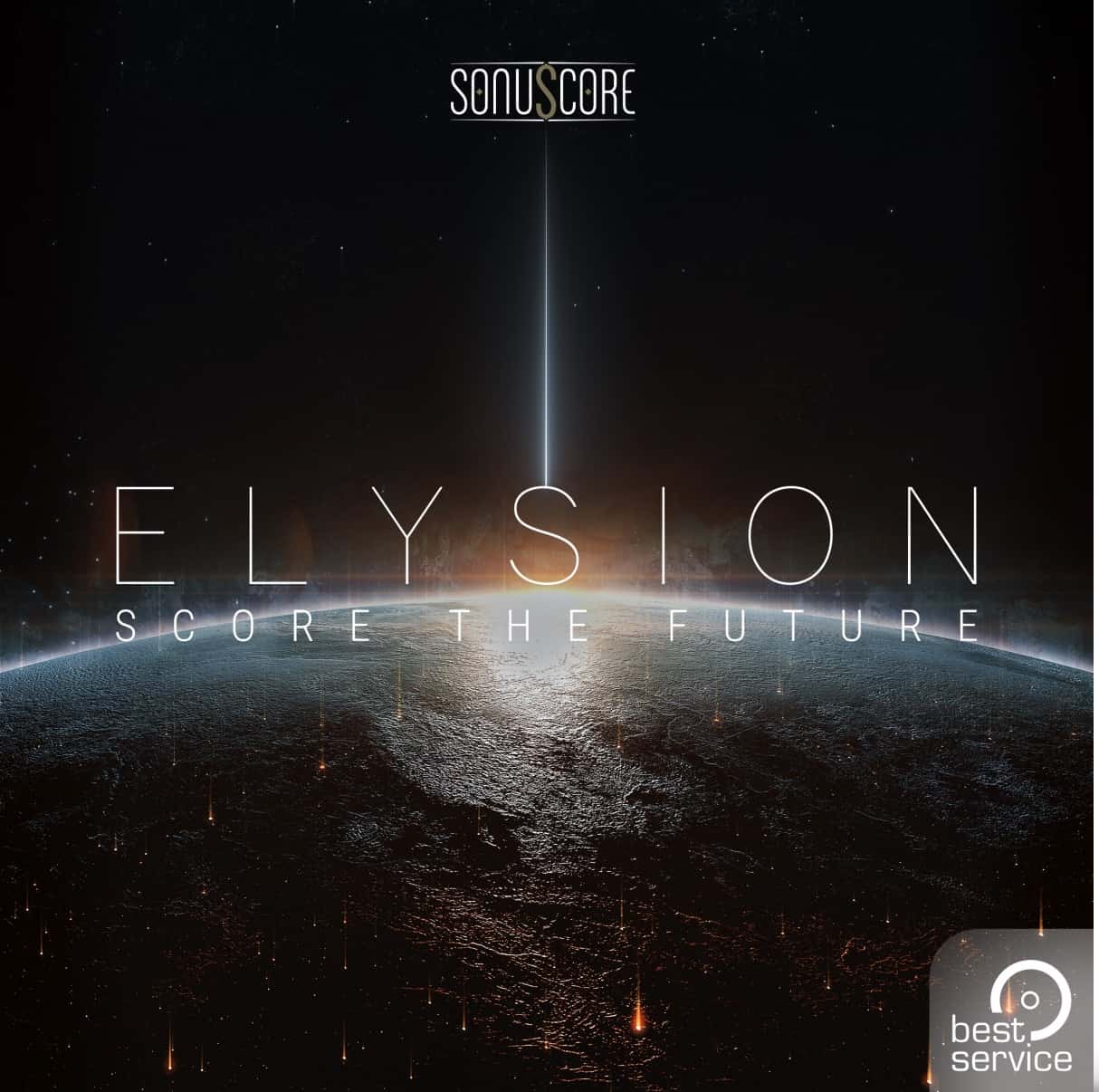 Elysion The Hybrid Twin Of The Orchestra

ELYSION is an incredible new ambient scoring tool that offers massive soundscapes, huge sound banks, and lightning-fast performance. It’s perfect for anyone looking to create huge, sweeping soundtracks or simply add some more depth and atmosphere to their music.

The sound quality is amazing, and the ease of use makes it perfect for both beginners and professionals alike. If you’re looking for a new way to add some serious ambient firepower to your arsenal, ELYSION is definitely worth checking out!

I didn’t know what to expect, but Sonuscore’s ELYSION was a pleasant surprise. As the proprietor of The Orchestra and Strings of Winter from Sonuscore, I was anticipating what the next chapter in the saga would entail with this new instrument intended for hybrid scoring. This is a powerful and gripping instrument. This library works wonderfully with The Orchestra.

The concepts behind the subjects seemed brilliant since each one was based on the eight planets in our solar system. For example, Mercury “The Nimble Racer”= Animated, Lively, Diverse, Venus “The Soulful”

The additional features include the ability to Drag and Drop Midi performances, which are also available in The Orchestra. You’ll notice a yellow export MIDI button in the lower right corner. After that, you can export your theme’s performance to various midi channels in your digital audio workstation by dragging and dropping the icon into your DAW.

For customers who own “The Orchestra”, “String of Winter” or “The Orchestra Complete” there is an attractive crossgrade available. Best Service did send a review copy with no strings attached.

Best Service has launched an online version of Elysion for testing on Try Sound. Look for the “PLAY” button and click it.

A film composer is someone who writes original music to accompany a film. The music is written specifically to enhance the mood and emotion of the scene, and it is often used to convey the overall tone of the film. Film composers typically work with an orchestra, and they often use aggressive, powerful, and driving orchestral arrangements to create their music.

This type of music can be very effective in setting the stage for action scenes or providing a sense of tension and suspense. In addition to working with an orchestra, film composers may also use electronic instruments and sound effects to create their music.

Ambient music is a genre of music that emphasizes soundscapes over traditional musical structures. It often features long, drawn-out tracks with minimal melodic content. The goal of ambient music is to create a feeling or atmosphere, rather than to tell a story or evoke specific emotions.

Hybrid sounds are created when two or more sounds are combined. This can be done by layering different sounds on top of each other, or by using electronics to manipulate the sound waveforms. Elysion is a band that specializes in creating ambient music with hybrid sounds.

Their music is often described as being “ethereal” and “dreamlike.” Elysion’s unique sound is created by combining traditional instrumentation with electronic elements. This combination creates a soundscape that works for the composer and the audience.

Review of Elysion a Scoring Tool by Sonuscore & Best Service

Based on The Orchestra ensemble technology in this review we are looking at Elysion the hybrid twin of The Orchestra this time based on Samples Synthesized Instruments.

When first announced many composers and producers assumed that the content was recycled from The Orchestra Library. The opposite is true. At its core, the sound of Elysion is based on hand-made prepared, and synthesized. Sonuscore treated the sound during recording and in the post similar to the recording of acoustic instruments.

As the synths and sounds have been treated as real instruments you get the benefits of instruments when playing Elysion patches. The playability is real and the arrangement possibilities with The Orchestra do help a lot when sketching a track.

Elysion’s uniqueness is rooted in the completely original Sonuscore’s enormous 5-part engine. The same engine was used in The Orchestra and Mallet Flux. You want to start by using the presets and after your first touch start to customize the sound to make it truly yours. A composer can create their own pads, rhythms, and arrangements and save them as user presets.

A composer who is using The Orchestra will feel at home at the start of their journey. The resulting sounds are compact and pulsating compositions that are not prefabricated. Playing notes and chords on the keyboard results in variations of the arpeggiators. Elysion is positively easy to perform resulting in rhythmic and extremely diverse sound movements.

The modern film composer has a very specific set of tools at their disposal. With an aggressive, powerful, and driving orchestra, they can create music that is both exciting and emotionally evocative. One of the most effective ways to use this arsenal is to compose with a clear purpose in mind.

Whether that purpose is to heighten the suspense of a scene or to add an extra layer of emotion to a character’s arc, a skilled composer will know how to use the music to maximum effect. In recent years, we have seen some truly masterful examples of film composing, and it is clear that this art form is only getting more sophisticated.

As audiences become more demanding, film composers will need to rise to the challenge and continue to push the boundaries film composer has a very specific set of tools at their disposal. With an aggressive, powerful, and driving orchestra, they can create music that is both exciting and emotionally evocative. One of the most effective ways to use this arsenal is to compose with a clear purpose in mind.

There are plenty of effects, settings, and mixing functions. Elysion offers 142 instruments and 230 themes (ensembles) driven by more than 12000 samples.

Film music has the ability to create a variety of emotions in the viewer. It can be used to convey a sense of excitement, or create an atmosphere of suspense. In some cases, it can even add a touch of humor to a scene. However, one of the most important functions of film music is to create a sense of movement and depth in the themes being performed.

This is often done by adding layers of sound, such as strings, woodwinds, and percussion, which can give the music a more three-dimensional quality. In addition, film music often makes use of leitmotifs or recurring themes that represent certain characters or concepts.

By using these techniques, film composers are able to create music that is both engaging Elysion by Sonuscore is one of the most successful Kontakt libraries to date. The included MOTION ENGINE joins movement and depth to the performed themes. When you activate the motion button the linked parameter is further managed and fine-tuned with the mod wheel.

Composer Benny Oschmann made the walkthrough below dissecting his magnificent musical piece “The Milky Way Express”. Benny’s example is useful as it shows how you can combine different libraries and how Elysion fits into a mix.

Benny Oschmann is a composer who was born in Germany in 1976. He studied music at the University of Music and Performing Arts in Munich, and his work has been performed by various orchestras and ensembles around the world. Oschmann’s music often explores the relationship between sound and silence, and he often uses unusual combinations of instruments to create his unique sound.

In recent years, he has become interested in creating works that can be performed in non-traditional spaces, such as parks or public squares. This has led him to develop new ways of thinking about musical form and structure. As a result, Benny Oschmann’s music is both innovative and accessible, attracting listeners from all walks of life.

Once you have been inspired by a theme, drag and drop the arrangement of your performance to your DAW. Now you are free to use it within every library you own. MIDI Export is supported by simply dragging and dropping the MIDI data from the library into your favorite DAW.

You can change the notes and rhythms for each exported clip later. These MIDI files can then be used with other Kontakt Libraries or Synth instruments. Leverage the produced MIDI sequences from Elysion’s ensemble engine. You can modify notes, merge various patterns combine Elysion and The Orchestra merged in the DAW.

Film music is an important part of cinema, serving to create a sense of movement and depth to the themes being performed, as well as adding excitement or suspense to certain scenes. One of the most successful tools for creating film music is Elysion by Sonuscore.

This library includes the MOTION ENGINE, which joins movement and depth to Sonuscore is a tool that every film composer should have in their arsenal. With its included MOTION ENGINE, it allows for movement and depth to be added to the themes being performed. This, combined with its ability to be used with other libraries, makes it an essential tool for any composer looking to create cinematic music.

Elysion is another addition to the “The Orchestra” Universe. Sonuscore joined by Best Sevices addresses with Elysion the open space between orchestral and synthesizer sound and vibe. The character, tone and presets included are easy to use as they are or can be customized fitting seamlessly into any context. When you combine and mix tracks from Elysionit fit very well with other libraries.

Special features that patterns created with Elysion can be transferred by using MIDI to your DAW are key benefits of Elysion and the whole Orchestra product lineup. There are many other Kontakt libraries where I wished this Elysion feature would be included to ease a composer’s task.

Elysion combined or standalone with The Orchestra Complete is an absolutely excellent comprehensive ensemble full of organic and synthetic sounds. Elysion waits for you – ready to play.

ELYSION is an impressive ambient scoring tool that is capable of creating huge, sweeping soundscapes. It is also incredibly fast, making it perfect for creating quick sketches or longer pieces. The Kontakt library comes with a huge range of presets and samples, and it is also compatible with a number of third-party libraries. ELYSION is an excellent choice for any composer looking for a powerful and versatile ambient scoring tool.