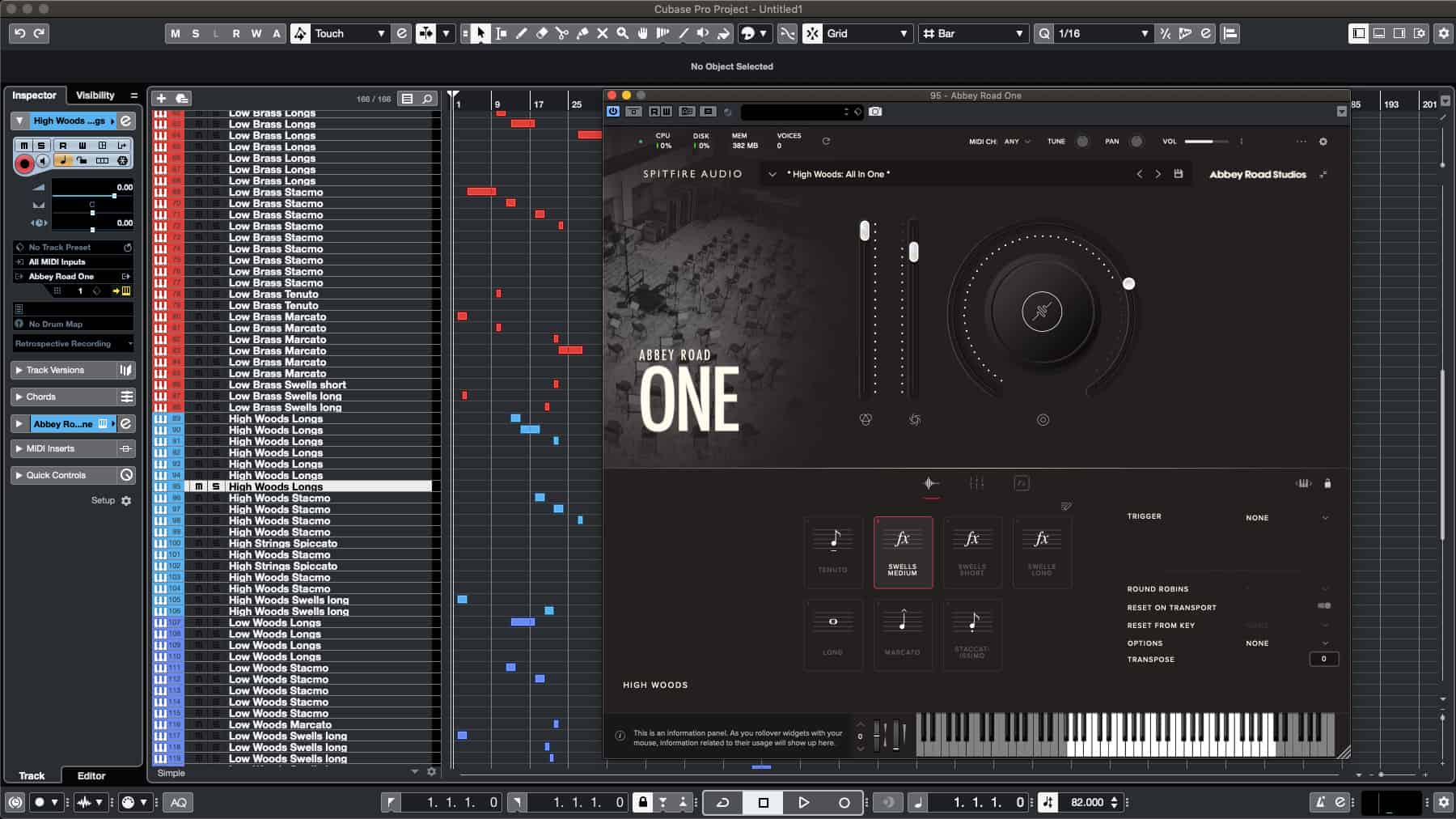 Spitfire Audio is proud to announce a partnership with world-famous Abbey Road Studios, showcasing the foundational film scoring sound of Studio One on ABBEY ROAD ONE: ORCHESTRAL FOUNDATIONS.

Enter the room most composers can only dream of: Studio One at Abbey Road. Unparalleled and exclusive access to the world’s most celebrated recording location for movie music — from Star Wars and Lord of the Rings, to Harry Potter and Avengers: Endgame — it doesn’t get more iconic.

Carefully capturing a full, symphony-sized (90-plus-piece) orchestra inside the world’s largest purpose-built recording studio, with world-class first-call musicians recorded by four-time GRAMMY® Award-winning engineer Simon Rhodes using Abbey Road Studios’ stunning selection of microphones, magically creating the supremely sampled core of an easy-to-use expandable virtual instrument library like no other, split into strings, woodwinds, brass, and percussion, pre-orchestrated as a perfect fit for established music-makers (wanting to quickly sketch an idea at high quality) and newcomers (learning how to write for an orchestra) alike, and available to pre-order.

Abbey Road Studios is indisputably the most famous recording studio in the world and a global music icon. As the world’s first purpose-built recording studio, opening on November 12, 1931, almost anyone who’s musically anyone has walked up the eminent entrance steps to 3 Abbey Road in London’s St John’s Wood. While embracing classical recordings and big bands to the first British rock ’n’ roll records, and defining the sound of the ‘Swinging Sixties’ and beyond, Abbey Road Studios has been home to the artists who have shaped music history and popular culture — from The Beatles, Pink Floyd, U2, and Oasis to Florence + The Machine, Kanye West, Adele, and Frank Ocean.

Clearly, innovation has always been at the heart of Abbey Road Studios, from the birth of stereo to numerous pioneering advances in recording technology, and this spirit continues today with Abbey Road Red, Europe’s first music-focused technology incubator. It is certainly safe to say that Abbey Road Studios has history.

Since Spitfire Audio has been hard at work writing its own chapter into recording history as a British music technology company that specialises in sounds — sample libraries, virtual instruments, and other useful software devices, duly collaborating with the best composers, artists, and engineers in the world to build musical tools that sound great and are exciting to use, ultimately working with Abbey Road Studios was written in the stars, surely.

“Abbey Road, for most people, is synonymous with The Beatles, but for us film composers it is synonymous with the sound of cinema,” says Spitfire Audio Co-Founder Christian Henson, concurring: “The whole idea behind Spitfire Audio was to approach recording samples exactly the same way you would film scores — same place, same microphones, same people, so it’s only natural that we would end up in this iconic location: Abbey Road Studio One. You can get 200 players in here, which gives you a lot of scope for that kind of big Hollywood sound, but also it probably has the best microphone cupboard in the world.” Such sentiments are echoed by fellow Spitfire Audio Co-Founder Paul Thomson: “There’s a magic in the air, and it’s the essence of composers who’ve recorded here — incredible composers, like John Williams, Jerry Goldsmith, Alan Silvestri, Thomas Newman… Edward Elgar, of course. Almost everybody on the planet will have heard a piece of music that has been recorded in this room.”

So Studio One is where Spitfire Audio’s announced partnership with Abbey Road Studios solidified into what is seeing the light of day as ABBEY ROAD ONE: ORCHESTRAL FOUNDATIONS first. For Christian Henson and his own company colleagues and the team at Abbey Road Studios, this release musically marks the beginning of something special. “This is a massive creative partnership — so much so that we’re developing a number of new ranges, the first of which is called ABBEY ROAD ONE: FILM SCORING SELECTIONS,” says Christian Henson. “The first product within this range, captured in this iconic space, is ABBEY ROAD ONE: ORCHESTRAL FOUNDATIONS, which is, as it describes, the foundation — the starting point — of this journey that we’re going to take everyone on.”

As Abbey Road Studios Head of Audio Products Mirek Stiles sees it, “While nothing compares to recording a 90-piece orchestra in Studio One, we wanted to enable aspiring composers and seasoned pros alike to obtain a degree of that magic from the comfort of their own creative spaces. For a lucky few, ABBEY ROAD ONE will provide a sketch pad for themes to be signed off by directors, knowing those same notes will be replayed by musicians within the bricks and mortar of number 3 Abbey Road; for others, this will be an inspirational first taste for dreams yet to be fulfilled. Then there will be the rule-breakers from unexpected genres using ABBEY ROAD ONE as a creative tool in its own right, in non-conventional ways. I’m thrilled that Abbey Road Studios has finally partnered with the innovative and creative minds at Spitfire Audio.”

That said, then, ABBEY ROAD ONE: FILM SCORING SELECTIONS is made up of ABBEY ROAD ONE: ORCHESTRAL FOUNDATIONS at its core, essential sounds from a symphonic ensembles-based library, courtesy of a 90-plus-piece orchestra — comprising strings (16, 14, 12, 10, 8); brass (four horns, four trumpets, three trombones, two bass trombones, one contrabass trombone, one tuba, and one contrabass tuba); and woodwinds (one piccolo, two flutes, two oboes, one cor anglais, two clarinets, one bass clarinet, two bassoons, and one contrabass bassoon); plus percussion (performed by three players on a huge selection of instruments) — carefully captured inside the world’s largest purpose-built recording studio, with world-class first-call musicians recorded by four-time GRAMMY® Award-winning engineer Simon Rhodes using Abbey Road Studios’ stunning selection of microphones, magically creating the supremely sampled core of an easy-to-use expandable library like no other as a perfect fit for established music-makers and newcomers alike. And all pre-orchestrated, so no need, necessarily, to understand how the individual instruments lock together.

There is (much) more to come, as Paul Thomson teases, ending on an equally exciting high note: “ORCHESTRAL FOUNDATIONS will be accompanied by a range of smaller, more focused selection libraries, covering different playing styles and different groups of instruments, but with a very specific focus with each package.” Put it this way: with those upcoming selections set to be more characterful and idiomatic, inspired by classic films scores captured in Studio One — orchestrated combinations designed for easy use, affording composers the opportunity to effectively customise and curate their own ABBEY ROAD ONE palette, ABBEY ROAD ONE: FILM SCORING SELECTIONS sees Spitfire Audio and Abbey Road Studios starting out on a productive partnership that is only just beginning, with huge-scale projects in the works including the most detailed high-end modular orchestral library ever created by the British music technology company for top-tier professional composers, and also diving deep into Studio Two, Abbey Road Studios’ most famous studio space. So watch this space!

Customers pre-ordering ABBEY ROAD ONE: ORCHESTRAL FOUNDATIONS will receive one of the two smaller ABBEY ROAD ONE: FILM SCORING SELECTIONS slated for release in early 2021 for free. (Spitfire Audio will send an e-mail reminder that this exclusive offer needs to be redeemed by March 31, 2021.)

Spitfire Audio’s namesake Spitfire Audio application allows anyone to buy now and download anytime and is available for free.