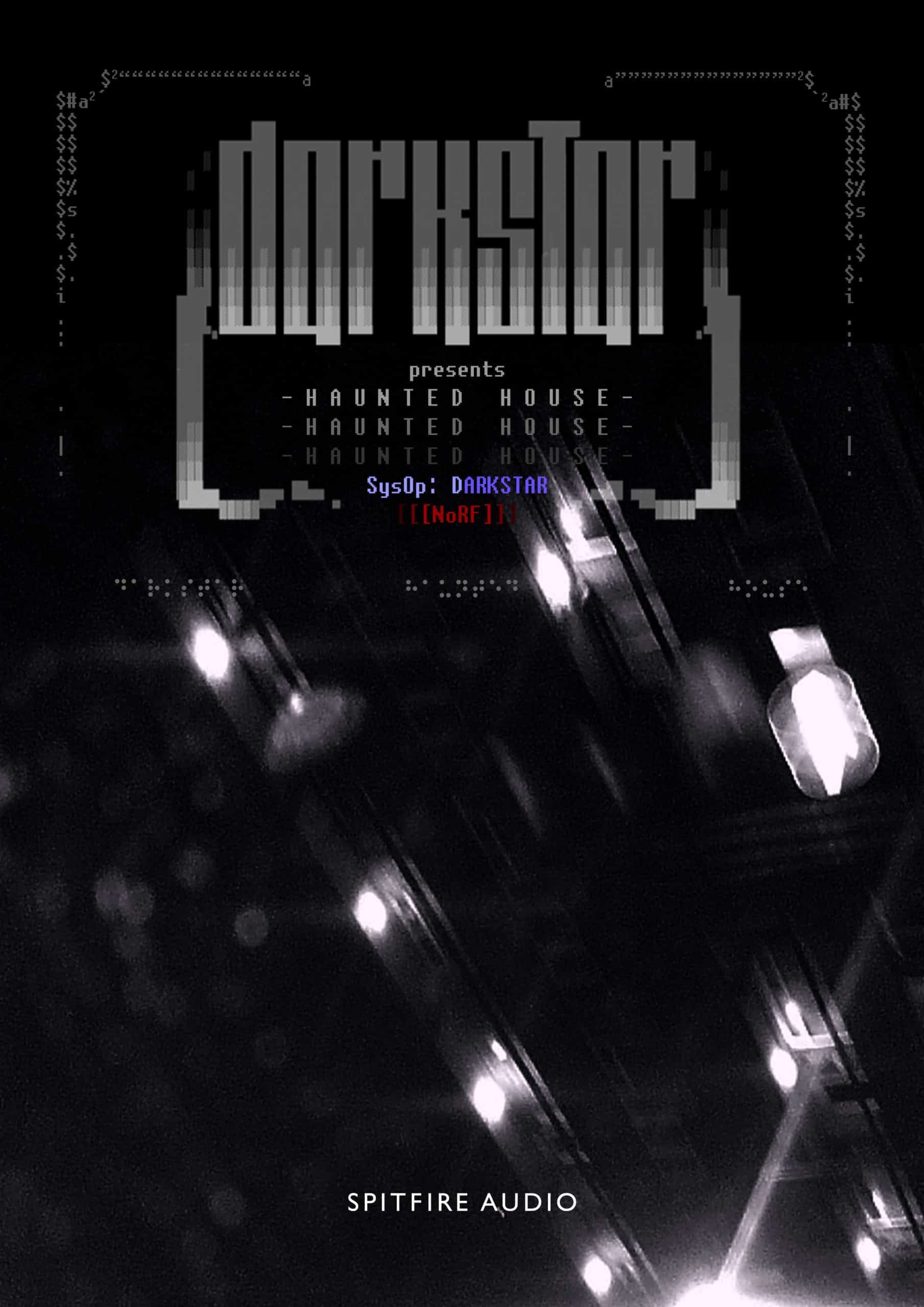 “HAUNTED HOUSE IS THOSE SOUNDS THAT CREEP AROUND AND LIE IN THE PERIPHERY. THE EDGES OF EACH SOUND BLUR BECAUSE THAT’S HOW WE LIKE THEM – NOISE AND ALL.”

Immerse yourself in the unique sound world of electronic duo Darkstar — processed analogue synth textures and loops, rich sub-basses, pitched-down drums, and icy, warped vocals, each layered with subliminal spectral echoes of rave culture and industrial white noise — ghosts in the machine, bleeding in and fading out.

From dark and ominous, to warm, heartfelt nostalgia, each sound is full of character and emotion, designed to create tension, depth and atmosphere for any setting — from contemporary electronic music, to hybrid, modern film, TV & game composition. Presented in our award-winning, easy-to-use dedicated plug-in, this versatile tool offers a range of controls and effects, so you can immediately transform each preset to facilitate your own vision.

Haunted House expands on the sonic palette of Darkstar’s 2020 album Civic Jams, out now on Warp Records — ‘a photonegative of a dance record’, exploring their experience of the ever-changing London music scene — the claustrophobia and the euphoria; the sense of belonging found amidst the isolation of inner-city life; the uncertainty of its future.

Darkstar’s journey into electronic music began with sequencers and extensive sampling — found sounds from the real world, films, TV shows, and samples of existing music. Their unique approach to sonic experimentation is palpable in the colour and shade of this versatile collection, made from analogue synths, organ samples, found sounds, vocals (performed by Aiden Whalley), and drums, transformed via finely tuned processing techniques — from tape saturation to outboard re-amping, implementing warmth and texture in various ways.

Haunted House follows the release of Darkstar’s acclaimed 2020 record release, Civic Jams, out now on Warp Records. On their most personal record to date, Darkstar (Aiden Whalley & James Young) counterbalance observations of their home with those of the community surrounding it, resulting in a photonegative of a dance record shaped by a dialogue between shoegaze atmospherics and UK bass music’s ‘hardcore continuum’. The sample library is an invitation for producers, composers and artists to reimagine, recreate or completely pull apart Darkstar’s sound world and create something new.

The Civic Jams album is available to purchase via Warp Records, either on its own, or from November 19th as a bundle (limited edition 12-inch vinyl + Haunted House sample library).

Patterns of isolation are increasingly easy to fall into, especially when public spaces where people play, socialise, dance and protest are closed. Civic Jams is about reminiscing over loss, whilst moving forward with those we love. It offers an abstract look at life’s nuances and the search to find something to hold on to and enjoy.

Darkstar has also released Civic Jams Remixes as a digital download and  12” on Warp Records. This LP presents a selection of album reworks by John Talabot, Parris, Horsepower Productions, and Loraine James.

A distillation of a sonic palette built up over the last few years, Haunted House swings from introspective to expansive, moody and industrial to nostalgic beauty, from the highs and lows of nocturnal inner-city life, to the dawn coming through. Electronic beds of uneasy ambience are haunted by disquieting white noise, peripheral shimmers, taking influence from various dance music genres — from shoegaze to deep house to grime, and the euphoria of 90s rave abandon — echoes of millennial-era underground dance parties at clubs including The Void and Plastic People (with presets named in tribute to Darkstar’s favourite club nights).

Reminiscent of the hauntology movement, these sounds reflect the things which lurk at the back of our mind or in memory alone — the beauty and heartbreak found in everyday life; a nostalgia for a future promised that never came to pass; faded cultural memories, with sinister undercurrents; London as a shell of its former cultural self. It captures the collective spirit of a city in mourning and its desolate horizons — a ghost town, waiting for the dawn.

Darkstar’s origins in dance and bass music offer a fresh sonic perspective. Discovering electronic music through their love of sampling, they found their home and community in the London club scene. Their idiosyncratic take on electronic music has positioned them as key voices within the scene for the best part of two decades. In recent years, Darkstar have worked with the likes of Actress, Wild Beasts and Zomby, releasing music with Empress Of (XL) and Gaika. They have scored groundbreaking live dance performances with choreographer Holly Blakey (Mica Levi), as well as the Palme d’Or nominated short film, Dreamlands.

Darkstar were commissioned to write a piece for Organ Reframed festival, which they performed with the London Contemporary Orchestra at Union Chapel in 2018. In 2019, they performed two of their new compositions at Queen Elizabeth Hall for Unclassified Live. They have worked with Metal Liverpool, Arts Council England and Harthill Community centre to create an installation and performance piece with teens from migrant communities. The final performance, TRACKBED, was performed at the Barbican, London.

Spitfire Audio is a British music technology company specialising in sounds — collaborating with the world’s best composers, artists, producers and engineers to create sample libraries, virtual instruments and other musical tools that are exciting to use, offering thousands of sounds at your fingertips, for endless inspiration.

For 30 years, Warp Records has been synonymous with adventures in sound and vision, consistently furthering their position as one of the most creative independent record labels in the world. With a rich legacy and consistently groundbreaking vision of the future, Warp and its artists traverse mediums to explore new spaces. Aphex Twin, Flying Lotus, Brian Eno, Hudson Mohawke and Squarepusher are just a few of the artists who represent the label.

AE Modular – Getting Started with a Very Basic Patch