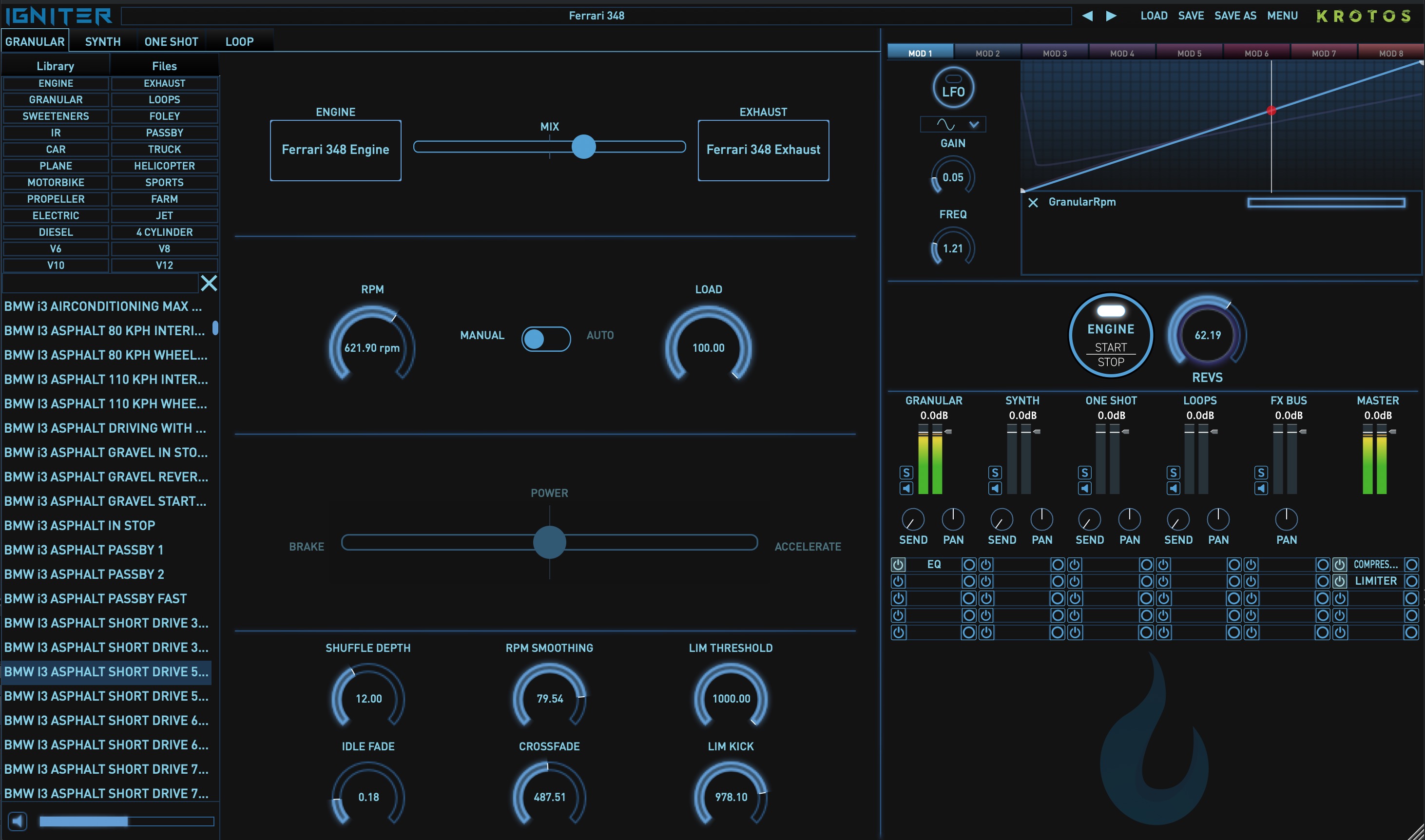 Igniter Full Tank by Krotos is a plugin that specializes in generating driving and aircraft sounds of all kinds. Under review is the Igniter Full Tank version a tool for professional sound design jobs. In this tool, you can select from over 20 vehicles. For these cars, motorbikes, planes, helicopters, spacecraft, and other flying or driving vehicles you can create engine or foley sounds.

The Igniter plugin or instrument is an essential tool generating actual or futuristic sci-fi vehicle and engine sound effects. Krotos did send a review copy with no strings attached. Igniter empowers you to create, perform and automate complex vehicle performance in your DAW. For the developer, Igniter was a remarkably deep and challenging project to catch and present an enormous variety of sounds features in addition to an included compelling sound design tool beyond traditional vehicle sound design. I bet it was a lot of fun to record all those fancy cars, bikes, and trucks at this level in detail. Your choice is to purchase an excellent Igniter or an Igniter Full Tank version. Any professional would instead select the Igniter Full Tank version as for a small uplift you get access to more sounds that help you in your career.

After purchase, you download and run the installer downloaded. Check your email for the download link. Activation via iLok is required. You do not need an iLok dongle/USB key to use the plugin. There is a demo version available. You can run Igniter for 10 days as a fully-functional demo without a license. As expected the demo includes far fewer assets and presets.

There are two versions Igniter and Igniter – Full Tank available:

Igniter by Krotos is an uncommon sound generator. Before Igniter WAV files and exclusive recordings are used (see also Transportation by BOOM Library Review). With Igniter you can use a tool to speed up your workflow. A tool that also has advanced sampling and synthesis capabilities.

The Igniter tool is an effect plugin for generating the sounds of several authentic and fictional vehicles and vehicles. On top you can create foley sounds or on earth cars or bikes and extraterrestrial “fabulous” vehicles.

If you need to travel to the stars and struggle to find the real recording from at lightspeed flying space ships or interstellar cargo ships the Igniter Synth section is right for you. Need a glider for a desert planet, a space hunter entering the atmosphere or leaving the orbit? The Synth Section is where you want to design those sounds. Within the Synth Section, you can use up to five fully functioning synth (don’t think about this as a musical one) to produce dramatic space ship and other sounds.

Back on earth and the German autobahn you can have a lot of fun generating the sound of your own virtual Audi, BMW, Mercedes, Porsche, Tesla, Harley Davidson, Aston Martin, Ferrari, and more. With each of the real vehicles, you are ready to hit the road/Autobahn. As no one knows how space vehicles will sound, I can only share with your that when I left the helicopter and started the interstellar ship, it sounded wholly convincing. Igniter Full Tank comes with 75GB of additional library content including onboard recordings, ramps & static rev bands, and Foley sounds, skids, slides and much more.

Included cars and vehicles in Igniter:

Besides the cars and vehicles, you can select there are also many presets included covering driving a car in a tunnel, sirens, tire skids, sounds from a car passing by and plenty of foley sounds. With the added convolution reverb you can also place the vehicle into a different environment. In Loop Section of the tool you can combine all these sounds to setup the different sounds that you hear while accelerating your sports car. Based on the scene filmed the Loop Tab Section is the place where you can carefully place for example a tire skids sound matching was is seen on screen.

The tool is extremely versatile as it helps you to place the sounds into a scene as required. Let’s assume you do have a scene where the camera switches between outside and inside the car, with Igniter you can cover that with many parameters, for example, making the engine sound more dominant in one scene and then mixing the exhaust in when the camera has filmed from a different location. Depending on what is needed to support the vibe you can make the engine noise more or less aggressive sounding – look for the LOAD dial. Small features like the AUTO mode simulate shifting the gear when you speed up or a deceleration using the brake. This article is not mean to become a tutorial. There are plenty of Tutorials available from Krotos plus the manual.

There are plenty of effects included (EQ, Saturation, Compressor, Limiter, Flanger/Chorus, Transient Shaper, Ring Modulator, Noise Gate, Doppler, and Convolution Reverb). I did run the sounds through other third-party effect chains (TRAVELER a Doppler Effect Tool by TONSTURM, Sound Particles and even through outboard gear like my Moogerfoogers (by Moog Music), Gamechange and some Strymon pedals. You do need to use the additional hardware or effects in the box, but it was fun and helped me to produce even more compelling sounds.

Using the program is complex at first when you start using it. If you do have experience with Weaponiser, you will feel right at home. If the Krotos tools are new to you mastering Igniter will become more comfortable after you spend some time with it. It is easy to produce a sound of a starting car and then accelerate it on the German Autobahn or go for a more relaxed cruise in the French Alps. To drive a vehicle in your DAW, the plugin even supports key sound elements that help to produce thoroughly believable sounds from a car that is using automatic gear shift or manual acceleration.

After you select the vehicle needed for the scene you can further shape the required sound with onboard tools. I did produce exceptional results by using the powerful effects chain in Igniter. It’s very easy to produce or “play” a vehicle in Igniter. Just load a matching preset and control the vehicle acceleration and movement. You can also use automation to match the footage. Capturing the automation is easy with a midi controller. Start the engine and “drive” your sports car, truck, bike, helicopter or space ship.

For the game developer, the upcoming middleware (still in development) will be key to integrated and faster inject sounds into newly developed games. A demo is expected this year at GDC.

Igniter Full Tank by Krotos is a must have for professional sounds designer, editor, or foley artists. Professionals use tools like this to be able to perform and deliver against the task on hand. Often the job is under time pressure, Krotos did design a tool that is quick and easy to use. When a director asks you to provide the sound to support scenes (real or CG) to sell it to the audience you can count on Igniter to produce sounds even for rather complex scenes. Krotos Igniter – a Porsche under the vehicle sound effect plugins that can produce many cars, bikes, foley and space vehicle sounds. In a nutshell, you can produce engine sounds of different vehicles and they would sound absolutely real.

Currently, in early 2019 there is no competition for this useful FX tool. Ignite is a complete kit for exciting driving and traveling noises of all sorts of vehicles. Many vehicles are real, but Ignite also includes incredible ways to produce sounds of space ships and otherworldly vehicles. It is embedded in a straight forward UI that is easy to operate.