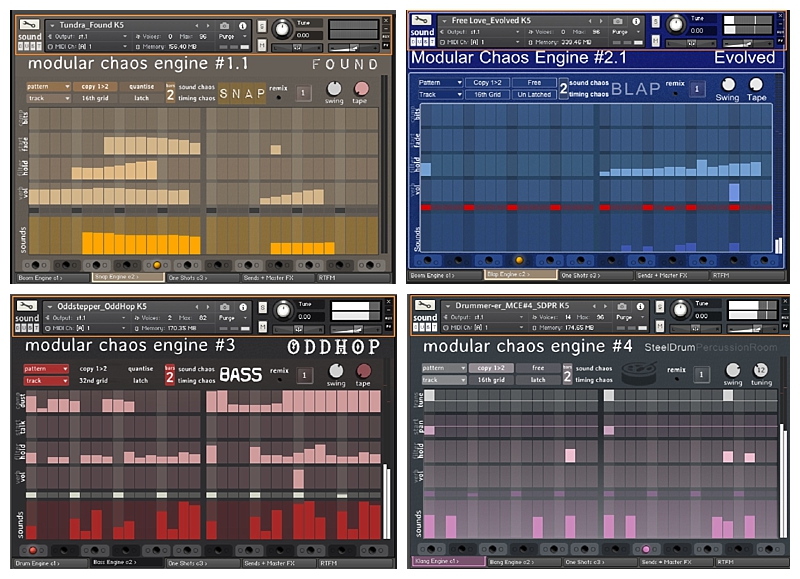 Sound Dust has released now four products in the Modular Chaos Engine series; we do review them all together today and talk about their differences and how they help you in your daily work.

Sound Dust is the brainchild of Pendle Poucher, a Brighton UK based composer, sound designer and lover of funny noises.

All version are installed after downloading and unpacking. You need the full Kontakt Player (see each product page for detailed requirements) to run the Kontakt libraries, the free Kontakt player will not work.

Modular Chaos Engine series started with Found sounds, the second release called Evolved was all about Dave Smiths’ Evolver. In the third release, OddHop Sound Dust included original acoustic and electronic sounds from legacy hardware synths. In the last and fourth release SteelDrumPercussionRoom lightly outfitted steel drums have been recorded, mangled and incorporated into the Kontakt sampler. Modular Chaos Engine part one was released in 2014, the fourth part was published in 2016, I hope there are more to come in the future.

Found is excellent for insignificant and glitchy drum patterns. This is a vast library if you need sound produced by an unconventional drummer who likes to perform on pigs, onions, some wood, some snow and the depths of a wet tent.

The sounds which are available here in the second part “Evolved” are based on Dave Smiths’ Evolver. The recorded hardware synth was a naughty efficacious synergy of an analog and digital synth. The hardware Evolver’s different vibe develops from the blend of its two analog oscillators and two digital oscillators. Today you can get them at quite a high price on eBay.

Pendle captured hundreds of sweetness from this analog and digital monster and shapes the sounds into a ‘drum’ device. With Modular Chaos Engine, 2 Evolved you quick to produce beats, breaks, and rhythms that will sound different.

OddHop is a drum machine for Kontakt, manageable and refreshing to use. Modular Chaos Engine 3 OddHop fits a musical need for a refreshing rhythm segment.

Again Pendle recorded with his binaural setup more than 400 sounds which have been mangled where needed to fit into the SteelDrumPercussionRoom release.

Sound Dust recorded different drums and did dress some drums for the recordings to produce move unheard sounds. Again recordings have been done with two microphones, in a Binaural recording setup. This recording method is designed to generate a 3-D stereo sound impression for the listener.

The Modular Chaos Engine includes across all four products two sequencers, the possible to use one shot, an FX page and a short manual under RFTM.

First time user of the sequencer will need some time to get used to it. I would recommend watching the videos Sound Dust released where Pendle explains the engine and the approach to use them. Even when you first wonder on what to do to create great sounding sequences after an average amount of time spend you get the hang on it. The usability and design are universal across all four products.

The FX page for all four products is similar and offers you are a great variety of effects tools, combine that with additional tools in your DAW from  2CAudio,  Audio Damage, BOOMLibrary, FabFilter, Goodhertz, IKMultimedia, KILOHEARTS, Krotos,  Kush, Sugar Bytes if you are into sound design and have access to those tools which come with an additional investment.

Modular Chaos Engine Vol 1 – 4 does allow you to create great rhythmic loops. It is a collection of sound libraries that you need to dig in a bit and will appreciate the depth and sounds Sound Dust included in each of the four products.  All libraries are excellent to compose and produce several musical areas, including beats for EDM and when you write to picture. The libraries work well for uplifting and dark scenes in your next score for your next movie project.