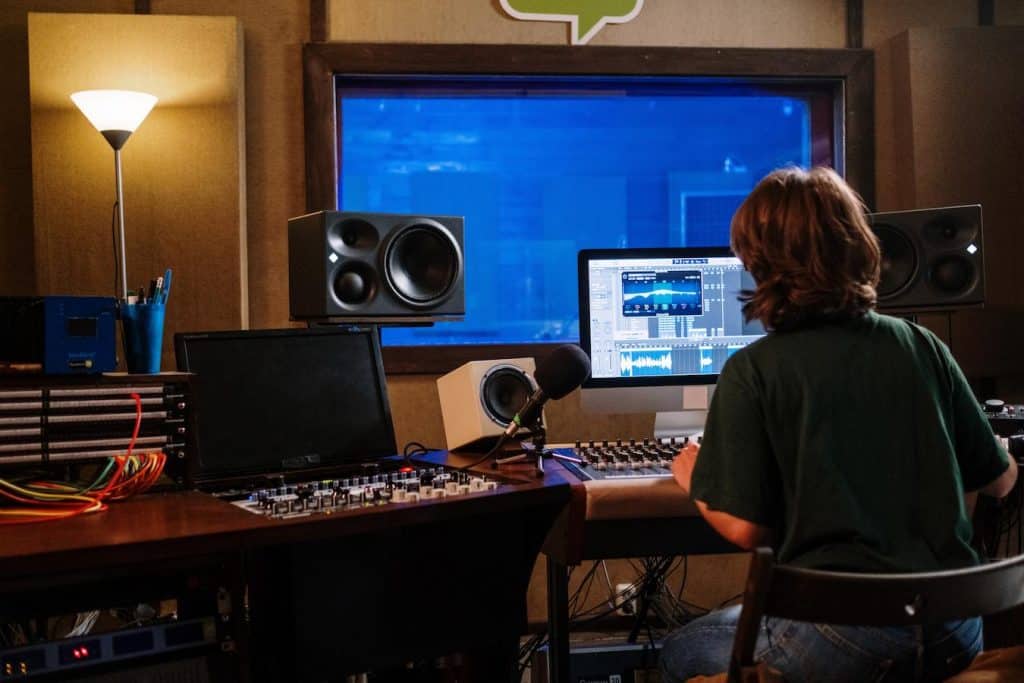 The use of background noise in film sound design can be essential to setting the tone of a scene. Ideally, the background noise should be recorded on the day of shooting. Often, this noise is referred to as room tone. It can be created with various audio recording techniques. For example, you could record a busy street, where car horns and light engine revving sounds are common. On the other hand, a forest setting could include a variety of animal sounds, such as birds chirping, wind blowing, and rustling leaves.

A film’s background noise is the “silence” behind the scene and informs the audience where the scene is taking place. It is often a quiet sound, but appeals to the audience subconsciously. Without ambient noise, a scene would feel unnatural and unreal. It also would be difficult to get the audience to feel a connection with the characters in the scene.

Film sound design is a complex process that takes many aspects into consideration. The general rule is that each audio element should work in harmony with the other parts to create a cohesive, impactful experience. The work of multiple professionals is required to ensure that all contributions are consistent. The main categories of film sound are background noise, music, dialogue, and sound effects.

Film sound designers also have some latitude in terms of their techniques. For example, they can use noise reduction techniques to eliminate hissing or static noise. In the 1970s, Dolby Stereo became widely available. This enabled film sound designers to experiment with new ways of delivering sound, while allowing film theaters to afford these technologies.

Foley sound designers are responsible for creating the sounds you hear in a movie. For instance, a scene in a diner will require sound effects for a character’s shoes, padded vinyl chair, and more. Foley sound designers also take into consideration any background noises. They create sounds for everything from simple things like the clacking of a car key to complex effects like the crackling of a fire.

The role of Foley sound design in film is to make film scenes sound more authentic. In real life, background noise is a natural part of everyday life. Foley sound designers add realism to these ambient sounds to create a more emotional effect for the audience. This process is sometimes called diegetic sound design and is commonly used in film.

Foley sound design artists must have an in-depth knowledge of music, sound, and rhythm to create realistic and accurate sound. Sound is so important for creating an immersive experience. Images are often grainy and the cameras can be handheld, but the sound must be perfect. Because of these challenges, it is virtually impossible to record pristine sound on location, so almost all sound is re-recorded later.

A good way to start learning Foley is to watch a movie on mute and add your own sound effects. Start by making sounds for characters walking or moving. Once you feel comfortable with these sounds, you can move on to sounds for their clothing. Remember to wear the proper clothing to make sure you create realistic sounds.

Dolby Stereo is a type of sound design in film that produces an immersive, multi-channel experience. It is one of the latest ways to create sound in a movie. Before this system was created, movies were usually output in mono, which means that all sound is coming from one single speaker. This new technology combines four channels into two and allows for a much more immersive experience.

In the late 1980s, integrated-circuit manufacturers began designing Dolby matrix decoders. This new technology made it possible to create full Dolby stereo sound systems for home use. The development of Dolby Surround in 1987 further enhanced the quality of home audio systems.

Sound design in film has evolved considerably since the earliest days of filmmaking. In the early days, film soundtracks were usually low-fidelity, and only included sound effects or occasional dialogue. After the introduction of Dolby Stereo, filmgoers began to expect higher-quality audio and more detailed soundtracks. Today, film soundtracks are produced by sound designers who work with the director and the supervising sound editor.

Cinema decoders use logic circuitry to determine which speaker channel has the maximum signal level. They also attenuate adjacent channels and switch between L and R priority. Cinemas have four separate sound channels and a sound mixer monitors the sound on these channels. Dolby does not recommend the use of intermediate channels in movies, and it is not used in most modern movies.

In the early 1970s, George Lucas was making Star and realized that a mono soundtrack wasn’t going to be enough. Therefore, he teamed up with Dolby to develop Dolby Stereo. In this film, the film was only mono, but it was the first movie to use Dolby sound.

Post-production sound design in film is a complex process involving the addition of various audio elements to a film. It requires the participation of a sound team with experience and enough time and resources to capture and enhance the audio. An effective sound track cannot be achieved with sub-par production audio, nor with bad actor’s dialogue. For this reason, it is crucial to get the sound right the first time around.

Sound design in film can be used to create tension during a dramatic scene or to heighten a romantic scene between two characters. It can also help the audience understand the underlying emotions of a film. Films without sound effects can be dry and lifeless, and the ideal sound design complements the images on screen while ensuring that they do not detract from the viewers’ attention.

A sound designer is responsible for determining the appropriate placement of music and sound effects. Sound designers use libraries of high-quality audio files to create audio elements. They may implement audio elements directly, or they may pass them on to a sound mixer who will incorporate them into the final cut.

Filmmakers and sound designers can take advantage of a range of resources to improve their skills. The SoundWorks Collection provides a wealth of information on film sound design, and features articles by Oscar-winning sound editor Walter Murch. Whether you’re planning a film or just need some background material, these resources can be helpful.

The Fimsound website is a great resource to help you understand the process of sound design. The site has hundreds of articles on film sound design, organized by film title. It’s the most comprehensive resource for sound designers on the Internet. It also features a section for beginners. There are audio clips and video clips that detail different aspects of film sound design.

Filmmakers often hesitate to refer new talent, so you’ll need to build up your professional network as early as possible. Production assistant sound designer jobs can provide valuable post-production experience. These are also free resources. Take advantage of these opportunities to expand your knowledge and network. A free trial is available, so you can see if it’s right for you.

Film composers can also be invaluable resources. Many film composers are available online, and you can find mentorships and competitions for film composers. You can also try your hand at original music by creating a film score yourself. With a little creativity and a few resources, you can make your film sound great without breaking the budget.

Film sound design is an extremely versatile and varied profession. It encompasses the creation of music and sound effects, using high-quality libraries of sound and audio samples. It also involves acquiring pre-existing sounds and manipulating them to create the right ambiance. Those who are looking to make a career in film should learn as much as possible about sound design.