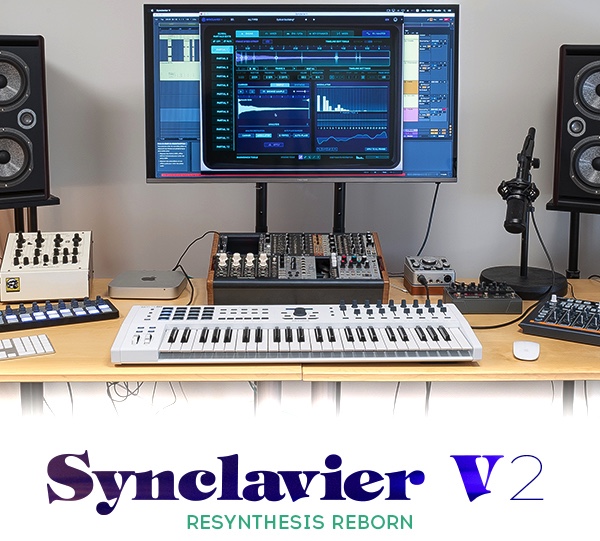 Recreated in partnership with original programmer Cameron Jones the Synclavier V was created and comes with an additive and FM synthesis. In the old days, a Synclavier was just out of the reach of many musicians due to its price and maintenance effort. However, it has been used in significant music production and was part of larger studio.

Of course, Arturia improved the developed version where possible to allow you to create aggressive leads and long evolving sounds and scapes. Synclavier V promptly went to the top of my preferred Arturia instruments.

Synclavier V is now updated to version 2, and Arturia has incorporated the optional add-ons of the original hardware into their software synth recreation. The new feature lets you perform using samples and create new sounds from those samples through the new resynthesis engine. There are in addition 160 brand new presets and a current sample library for you to explore.

By analyzing an audio sample, Synclavier V 2 can now extract key spectral information and sonic parameters at key points, creating a synth patch that mimics the sample. This patch can then be processed and modified just as you would with a normal synth sound, opening up huge potential for adventurous musicians and sound designers.

The original Synclavier was New England Digital’s competitor in the fledgling digital instrument market. To go up against the revolutionary but primitive audio samplers of the time, Cameron Jones and his team developed a totally new audio technique to recreate sound. Rather than relying on samplers with low memory and lo-fi converters, the Synclavier could mathematically analyze audio and mimic it using “recreation synthesis”.

Instead of resynthesising their samples, users can choose to play back samples with vintage digital grain and pitch scaling. A great way of making retro “hit” sounds, big textural pads, and quirky vocal hooks.

Synclavier V 2 now contains a resynthesis engine, letting it create synth sounds that mimic the tonal properties of an audio sample. Sounds complicated to use, but it couldn’t be simpler. Drag and drop the sample, auto-analyze it, and Synclavier will create a synth sound based on the sample. can with up to 100 key sample points, and the resulting sound can be augmented and processed just as you would with any other synth sound within Synclavier V.

Synclavier V 2 feature hundreds of new presets that show off its new features, Arturia have also included a selection of New England Digital samples to give it that authentic touch.

Several important, workflow-enhancing improvements have been made to the instrument’s UI, ensuring the best, most enjoyable Synclavier V experience ever.

The new version includes hundreds of new presets to play and personalize; a sample library of vintage New England Digital sounds; revamped timeline with host BPM sync; and new destinations in the Modulations tab!  V Collection 6.2 is a free update to all owners of V Collection 6. For more on this synth, collection to our V Collection 6 by Arturia Review.

To update any of your owned software, you do need to launch your Arturia software center to update the instruments.

V Collection 6.2 improves the already incredible integration between Arturia’s software instruments and its next-generation controller keyboards. A perfect match, the latest update adds a few handy shortcuts to KeyLab MkII. For example, clicking “Clear All” on the preset browser now automatically scrolls to the top of the preset list.

All 7,000+ presets found across the entire V Collection and all its purchasable Sound Banks have been reviewed and updated to ensure their levels are all of similar intensity. RIP headphone users? Not anymore. Now aggressive synths and sultry pianos have a similar perceived volume, letting you make informed preset choices on tone, rather than impressive volume.

Arturia’s developers are always working hard making sure that all 21 instruments in V Collection 6.2 work perfectly across different platforms and DAWs, and keeping up the latest software from other developers. Since the last update, we have resolved hundreds of issues. Here are some of the critical issues addressed in this update: